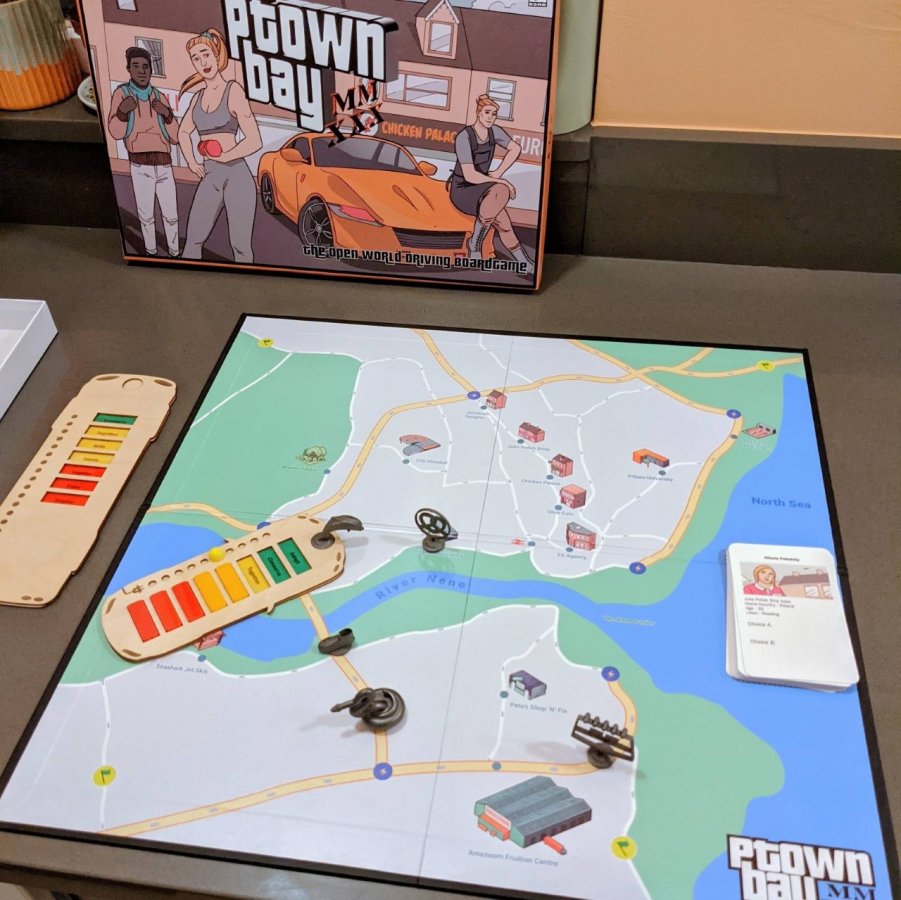 Bringing the missing voice and viewpoint of young people at risk of entering, and experience within, the criminal justice system to the forefront of environmental discourse, Wilding Nature by the socially engaged artist Hwa Young Jung will challenge the ideas of a ‘natural state’ for humans and non-humans.

Workshops with the young people using socially engaged, heavily discursive methods, will focus on the loss of biodiversity and rewilding as one solution to the climate crisis. The final co-produced artwork will take the form of a game.

It’s 2030, and we’re still getting to grips with a unequivocally heating planet, but the residents are mitigating and adapting where they can.

PTown is not just famous for its burgeoning hub of distribution centres.

It’s not all bad, for some!

PTown Bay MMXXX is a board game co-created with 14 & 15 year old young men excluded from mainstream education at the NACRO Peterborough, exploring their current and near future aspirations.

The game is set in 2030, the year the petrol ban kicks in, and according to local news source Cambridgeshire Live, a drastically changed landscape. Unlike traditional board games, PTown Bay doesn’t have a set starting or end point – instead it’s influenced by open world video games such as Minecraft, Assassin’s Creed or Grand Theft Auto. Players are invited to enjoy riding round the city, meeting colourful characters, completing missions, and collaborating or competing with other players.

PTown Bay MMXXX is a Common Ground commission for Season for Change.

Hwa Young Jung is a socially engaged artist who works with people to co-create projects, often with a focus on using games and play to explore social issues, creating a common ground for diverse disciplines and divergent communities to come together and make something new. She works in public spaces, using familiar ‘found formats’ (board game, card game, calendar, tea towel, Improv Night) to encapsulate the work created with collaborators.

Based in Liverpool, she has been producing work with a range of people for over 10 years – young people in libraries, social care workers, freshwater biologists, criminologists, men on probation and organisations (FACT Liverpool, International Slavery Museum, Howard League for Penal Reform, Metal Culture, Lancaster University).

She is interested in narrative driven ‘lived experience’ representations of people around a common theme or interest. Storytelling is important as the participants she works with are usually marginalised from mainstream society and collaboratively creating artwork allows us to give voice to their experiences. The artwork continues to engage a wider audience, usually in non-gallery spaces, creating a space for dialogue with the general public and the participants.