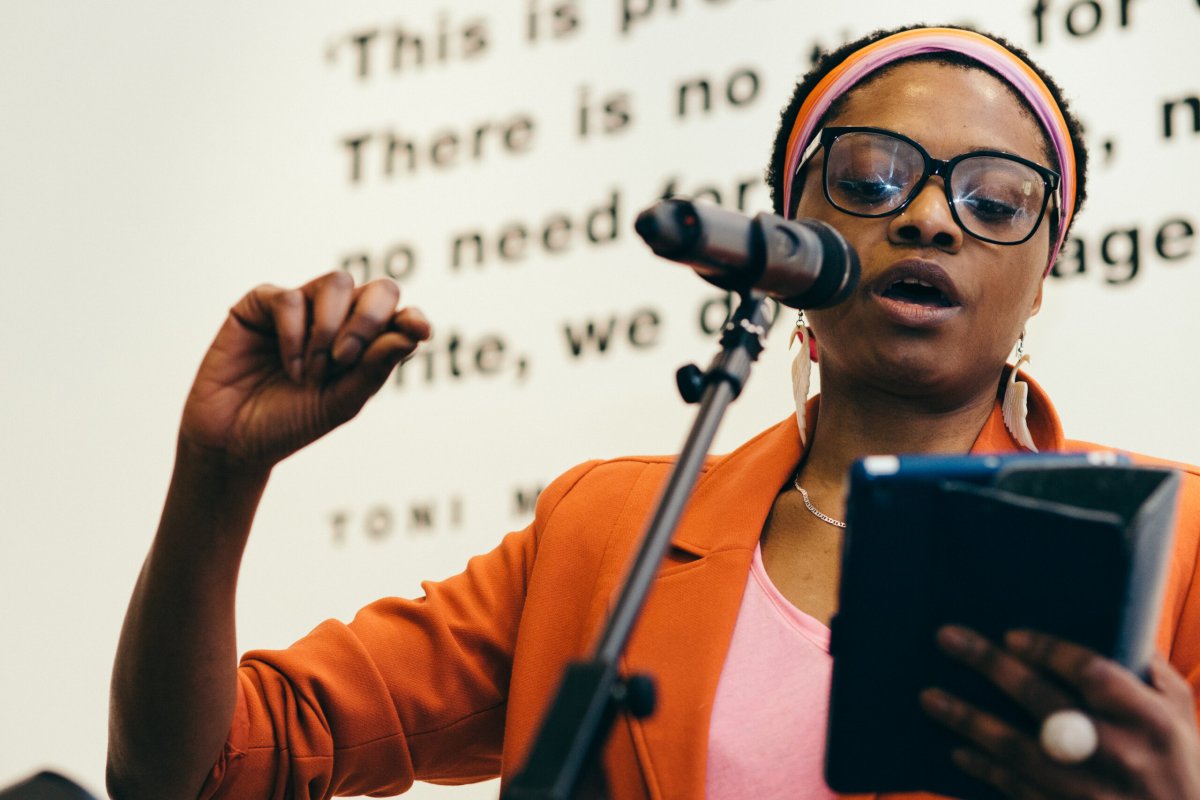 Apples and Snakes in association with Jazz re:freshed and The Albany present: Cece’s Speakeasy

As global temperatures rise, the quality and quantity of our crops decreases. In the not-so-distant future, coffee bean production will halt – caffeine will become extinct. By 2050 there will be no more chocolate.

Step forward into 2031…
Welcome to Cece’s Speakeasy.
A place for truth-seekers, chocolate lovers and coffee drinkers.
For adventurers.
For those with a story to tell and those who want to listen.
A place to indulge in the forbidden delights of an espresso martini,
devour a hot chocolate and just kick back, relax and immerse yourself.
A place for the people.

At present, CeCe’s legacy is a 3 city wide participatory programme, including Leicester and Bristol to work with climate specialists and established writers such as Deanna Rodger, to produce well informed, emotive and dynamic poetry films. Through October and November there will also be other events online launch for the poetry films and a Cece’s Satellite Speakeasy in Bristol. These events are designed to be a creative comment on issues of climate and environmental injustice leading up to COP26. Using the latest digital platforms to develop community, Cece’s poetry films will also spearhead a resource hub and knowledge sharing space for a poetic campaign that encourages people to go outside and be in nature.

Cece’s Speakeasy  is an immersive poetic experience commissioned and produced by Apples and Snakes , in partnership with UK Jazz tastemakers, Jazz re:freshed and The Albany, and co-commissioned by Season For Change.

Cece’s has received additional support from The London Community Foundation” and “Cockayne – Grants for the Arts”, the PRS Foundation, Jerwood Arts and The Garrick Trust.

About the creative team

Artistic Director Zena Edwards is a poet, performer and climate activist who uses song, movement and global influences as a jump-off for her words. Edwards’ fuses traditional African-instrumentation (the Kalimba and Kora) and new technology to create soundtracks for her poems and stories, producing a body of work that reaches culturally and generationally diverse audiences on an international level.

Zena is radical arts educator and creative director of Verse in Dialog – an arts, culture and public engagement production house dedicated to championing the arts for positive change.

Born in East London to Mauritian parents,  Musical Director Eric Appapoulay is a composer and self-taught multi-instrumentalist, whose passion for guitar started at age 8. Eric is a founder member of the Capital Radio young band of the year 1995 ‘Quite Sane’ (Jazz/hip-hop/fusion band) with Band members from schooldays Cassell the beat maker (Plan B) & Anthony Tidd (Steve Coleman). As an international musician since the age of 19, he has performed on tour and in the studio with artists such as: Yusuf (Cat Stevens), Lionel Ritchie, Neneh Cherry, Plan B, Craig David, Jason Derulo, Keri Hilson, Beverley Knight, Daniel & Natasha Bedingfield, Nitin Sawhney, Patrice, Wunmi, Kojo Antwi & Ady Suleiman.

Paul Burgess is an East London-based set, costume and video designer, and sustainability campaigner. Since training at Motley, he has designed for numerous venues, ranging from Shakespeare’s Globe in London to the Pakistani National Council of Arts, Islamabad. He co-founded the The Society of British Theatre Designers’s sustainability working group and is a core team member of Ecostage, the global campaign for ecological thinking in the performing arts. His previous work for Apples and Snakes includes designs for School of Dark and The Rememberers, and the Poetry Potting Shed in Queen Elizabeth Olympic Park.

Apples and Snakes is England’s leading spoken word poetry organisation, with artists at its heart. Spoken word trailblazers, we exist to champion the development of extraordinary artists, amplify ignored voices and to challenge expectations of what poetry is and can be.

Since 1982, ‘Apples’ has advocated for artistic and social change through the power of performance poetry, working with artists including The Last Poets, Billy Bragg, Lemn Sissay, Francesca Beard, Kae Tempest, Charlie Dark and Polarbear.

We put artists at the heart of everything we do, from ground-breaking artist development opportunities to flagship projects bringing extraordinary poets into local communities. By bringing together important voices in interesting ways, Apples and Snakes regularly create inspiring experiences for audiences across the UK.